Camille Corot (1796-1875), in full Jean-Baptiste-Camille Corot, was a French painter who is best known for his bucolic landscapes and atmospheric depictions of light and shadow landscapes. He was also known as a portrait and printmaker. Carot was born to prosperous bourgeois parents in Paris in 1796 his father was a draper by profession and his Swiss-born mother had a fashionable milliner's shop. Camille showed an early interest in art, and he would often go on walks in the countryside around Paris to sketch the landscapes. 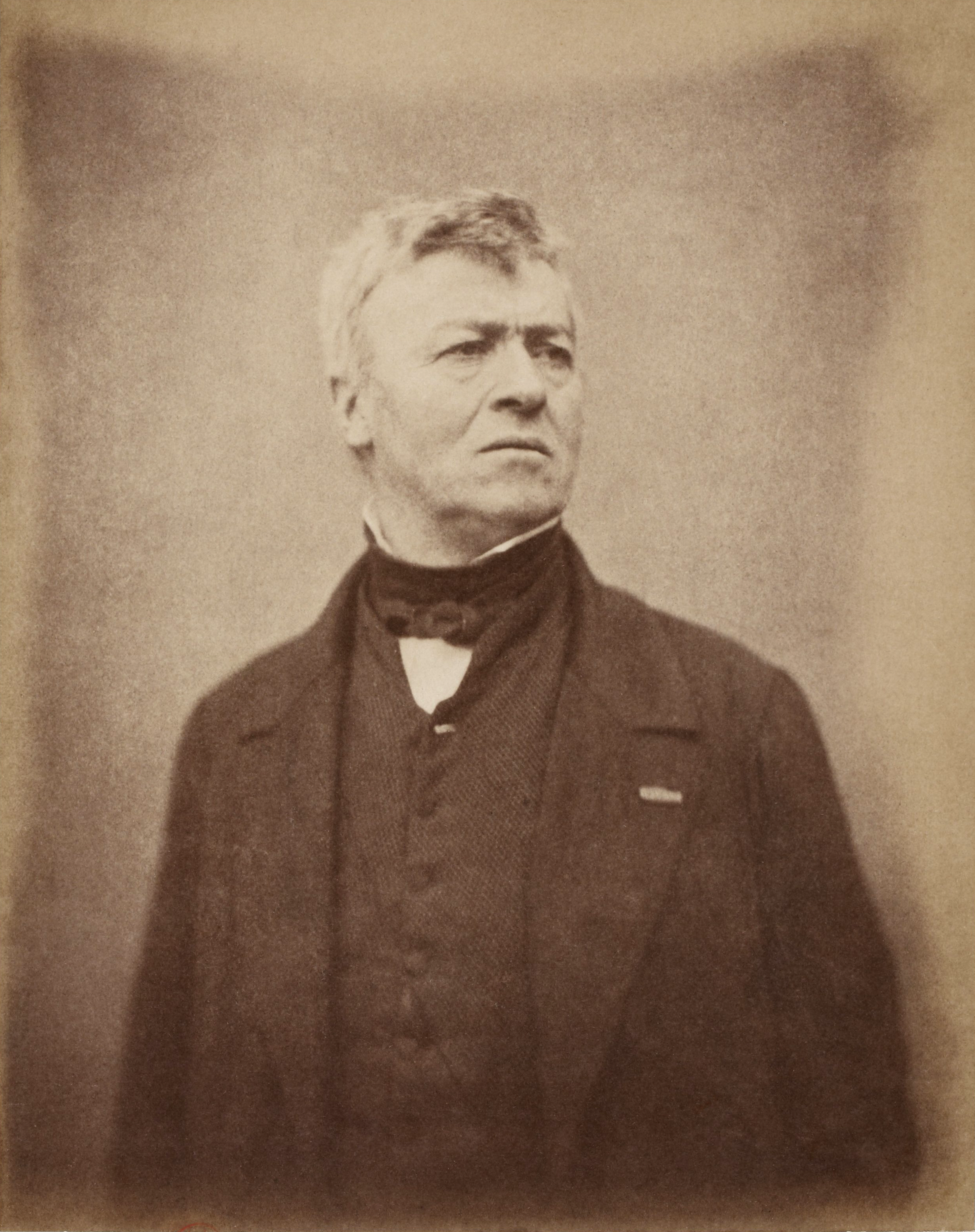 Corot's father discouraged him from pursuing a career in art, and he instead received a traditional education. However, as he failed to master the tricks of his father’s business, Camille enrolled in the École des Beaux-Arts in 1822, where he studied under the painter Jean-Victor Bertin and Corot also had some private instruction from Achille-Etna Michallon. Camille's early paintings were primarily portraits and religious subjects. However, he soon began to focus on landscape paintings, which would become his signature style.

Camille Corot began his artistic training by studying with neoclassical painter Jean-Baptiste Regnault. He later studied under Achille-François Oudinot, another neoclassical painter. In 1822, Camille Corot made his debut at the Salon, the official exhibition of the Académie des Beaux-Arts. Although he did not achieve success immediately, Camille Corot persevered and went on to become one of the most respected landscape painters of his time. He became a key figure in the Barbizon school of painting and his work helped to define the characteristic style of French Naturalism. In the autumn of 1825, Corot went to Rome and spent three years there which helped him shape his future career in life. Camille traveled extensively throughout Europe, painting the landscapes of France, Italy, Switzerland, and Holland. 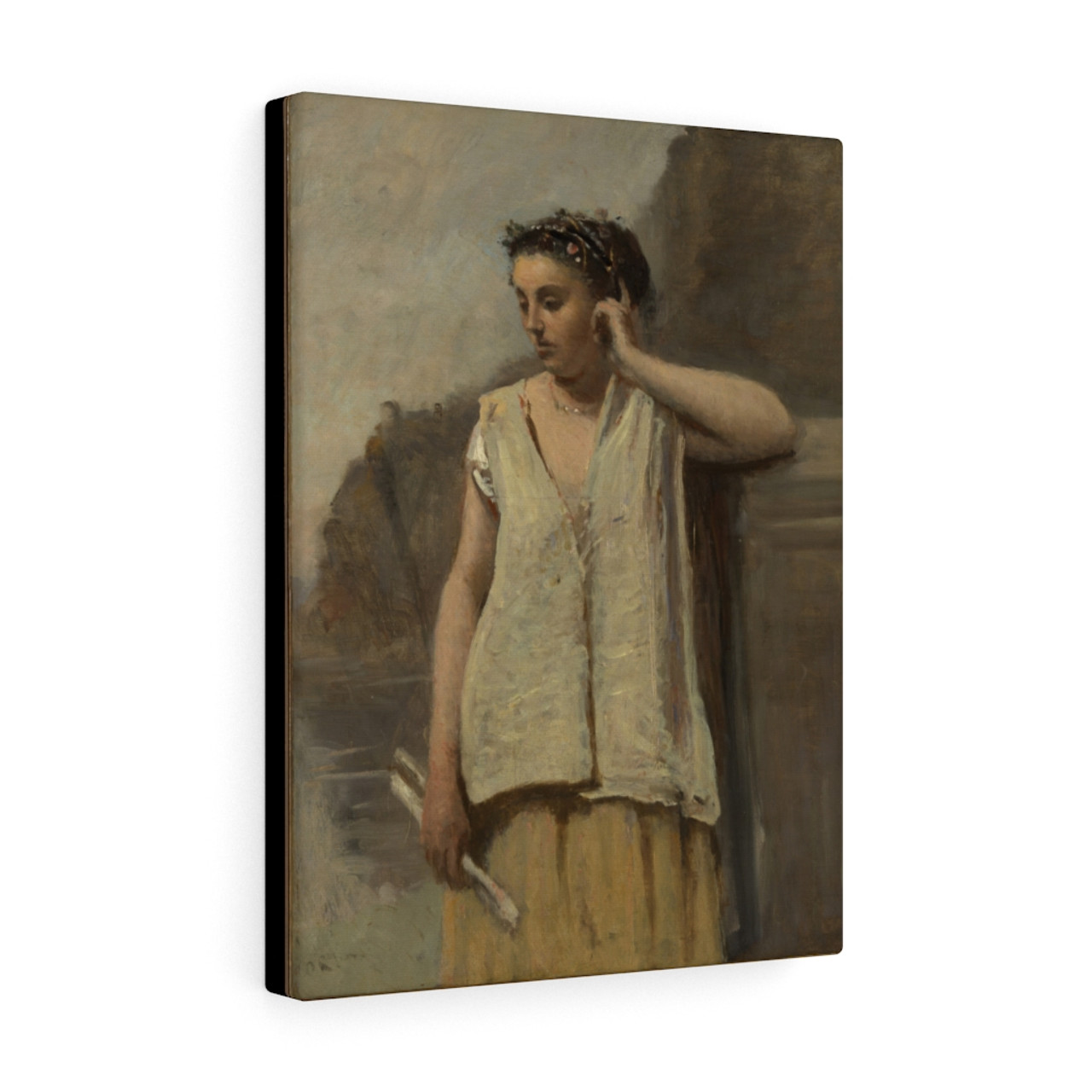 His Major Exhibitions at the Salon

Corot was firmly resolved that he would devote his life to painting and painting landscapes. This firm revolves stopped him from forming any serious mundane attachments and he never married in his life. He always spent the spring and summer months painting outside, making small oil sketches and drawings from nature. In the winter months, Corot would retire to his Paris studio to work on the larges pictures and he always exhibited at the annual Salon when it opened in May. His first major painting ‘The Bridge at Narni’ was exhibited at the Paris Salon in 1827. Corot exhibited his large landscape depicting the forest of Fontainebleau at the Paris Salon in 1833 and this earned a second-class award and the right to show his pictures without submitting them to the jury for approval. 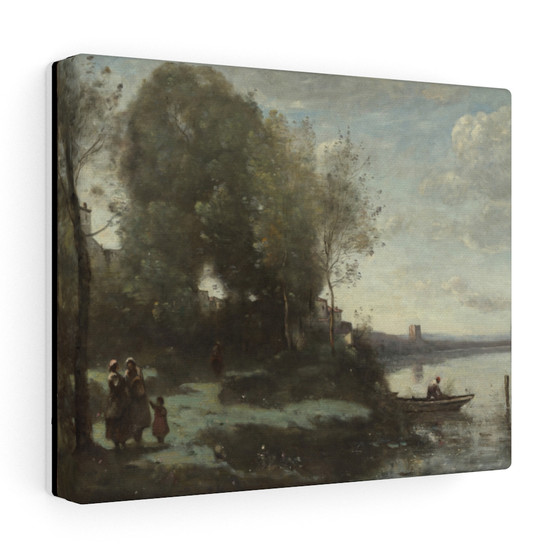 His Second Trip to Italy and other neighboring countries

Corot’s Second Trip to Italy in 1834 enabled him to visit several Italian cities such as Volterra, Florence, Pisa, Genoa, Venice, and the Italian lake district. The trip also helped him to collect so much material in small sketches to last for the rest of his life. During the later years of his life, from 1836 to 1862, Corot visited several countries such as Switzerland, the Netherlands, and London. 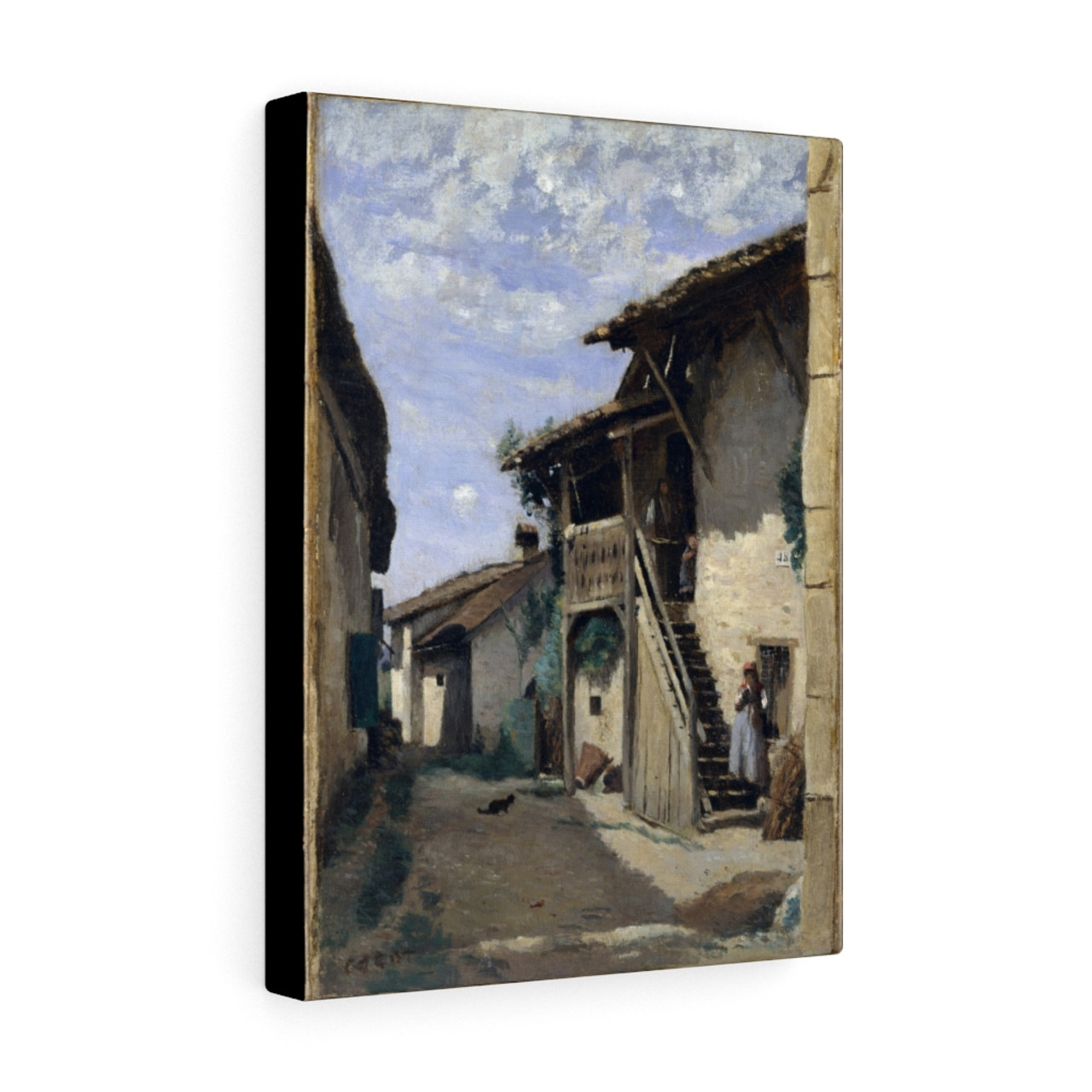 His major artworks at the Paris Salon

During the 1830s, Corot exhibited at the Salon regularly and some of Corot’s major artworks include ‘Fontainebleau’, ‘Hagar in the Wilderness, ‘Diana Surprised by Actaeon’, ‘Homer and the Shepherds’ and ‘Christ in the Garden of Olives. Corot exhibited all these paintings at the Salon during the period from 1835 to 1849. In’ 1840, the state purchased one of his works ‘The Little Shepherd’. One of the famous art critics wrote in his reviews stating that ‘Corot stands at the head of the modern school of landscape’. In 1846, Corot was conferred the honor of ‘The Legion of Honour’. 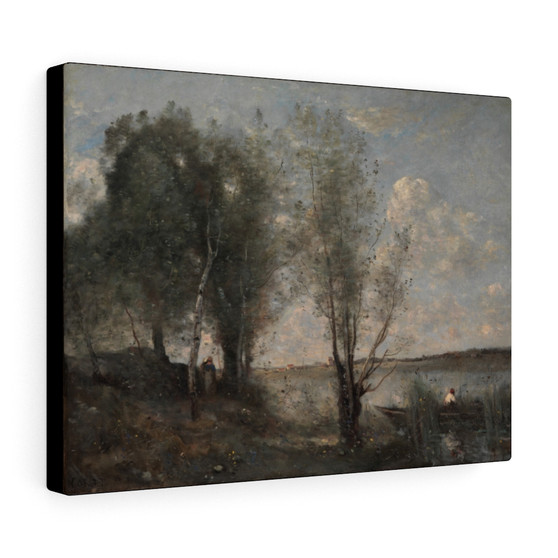 His paintings came to be in great demand

Corot became one of the major painters who were sending their big pictures to the Salon regularly by the 1850s and his paintings were much sought after, fetching high prices. He received a first-class medal for painting at the 1855 Paris Universal Exposition and Napoleon III bought a picture from him. Despite being a prolific painter who produced more than 3000 pictures, the demand for his paintings exceeded the supply. There are several versions of his paintings ‘The Studio’ and ‘The Pearl’ which are depictions of his absolute mastery over ‘tonal painting. He was in the company of some of the great painters of his time such as Jean-Francois Millet, Theodore Rousseau, and Charles-Francois Daubigny. Besides giving lessons to the upcoming artists and some of the impressionists like Camille Pissarro and Berthe Morisot, Corot extended sympathies and financial help to those artists who were in need of such assistance. 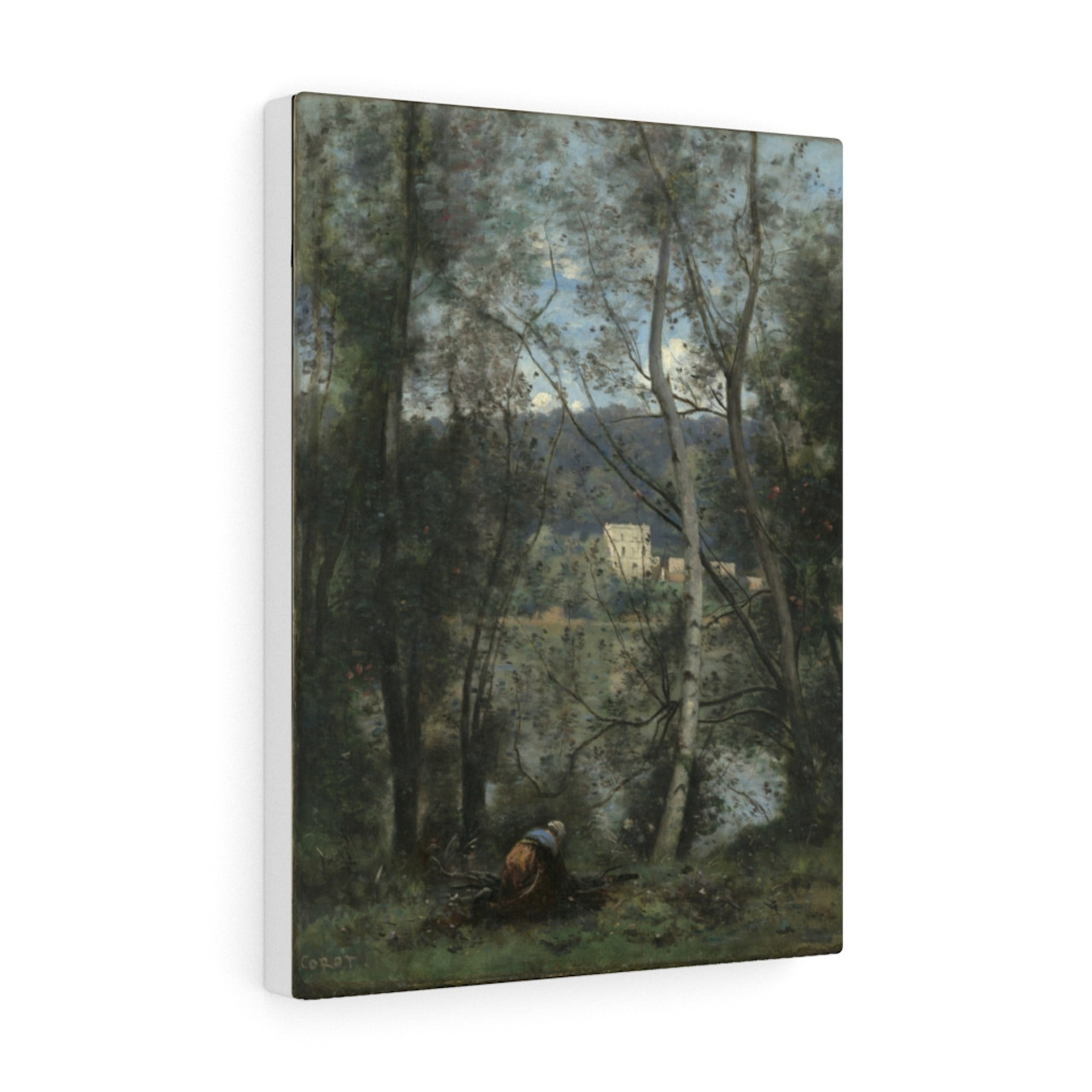 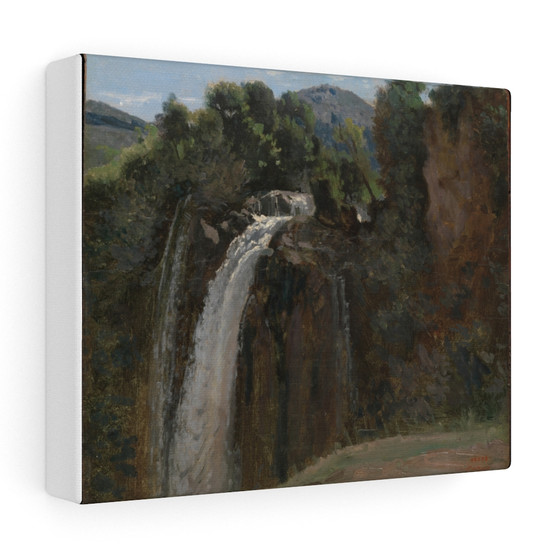 Camille Corot's painting Fontainebleau is a beautiful and evocative work of art. Painted in the mid-19th century, it depicts a forest scene near the town of Fontainebleau in France. The painting is characterized by its soft, muted colors and its tranquil atmosphere. Corot was a master of creating atmospheric effects, and Fontainebleau is a perfect example of his skill. The painting has a dreamlike quality as if the viewer has stepped into a fairytale world. The forest is alive with color and light, and the trees seem to whisper in the breeze. It is a peaceful and magical place, and Corot has captured it perfectly. 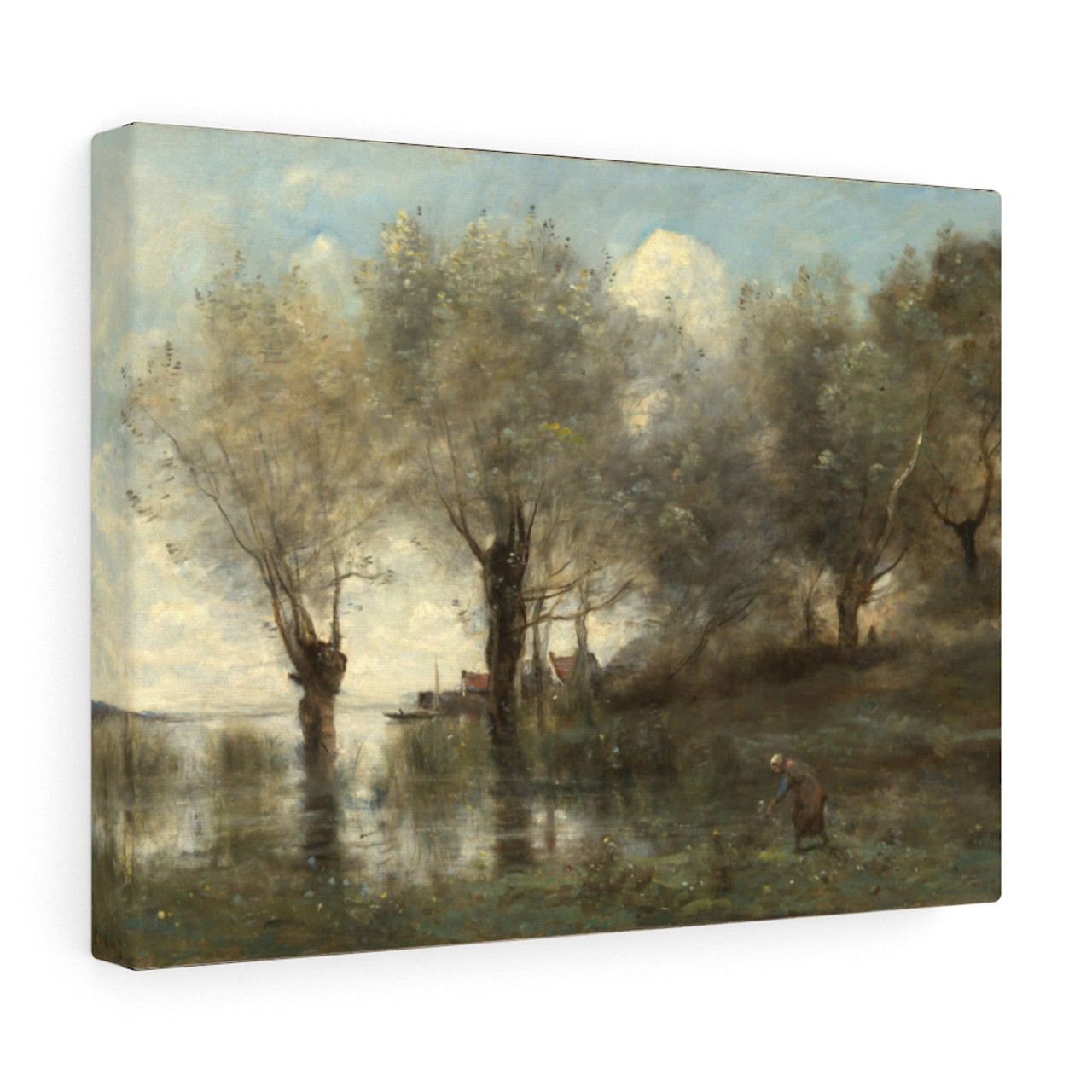 ‘Hagar in the Wilderness’

Camille Corot was a nineteenth-century French painter who is best known for his landscapes. However, he also produced a small number of figure paintings, including Hagar in the Wilderness. The painting depicts the biblical story of Hagar, who was sent into the desert by her master Abraham after she had displeased him. Camille Corot’s Hagar in the Wilderness is a moving portrayal of a woman in isolation and despair. The figure of Hagar is small and hunched over, her face hidden in shadow. She is surrounded by a vast and empty landscape, which adds to the sense of her isolation and desperation. Camille Corot’s painting is a poignant reminder of the human capacity for suffering and resilience.

Camille Corot's painting A woman Reading is a beautifully composed work that captures the peacefulness of a quiet moment. The woman in the painting is shown seated in a chair, engrossed in her book. The light of the setting sun filters through the trees, casting a warm glow on the scene. The background is softly blurred, giving the impression of a dreamlike state. The painting is imbued with a sense of calm and serenity, making it a perfect work to enjoy in moments of relaxation. Camille Corot was a French painter who was active in the mid-19th century. He was renowned for his landscapes and his ability to capture the beauty of nature. A woman Reading is considered to be one of his masterpieces, and it continues to be admired by art lovers around the world.

‘Portrait of a Child’

Camille Corot was a French painter who is best known for his landscapes. However, he also produced a number of striking portraits, including the work "Portrait of a Child." The painting depicts a young girl with blond hair and blue eyes. She is wearing a white dress and seated in a chair with her hands clasped in her lap. Although the girl's expression is somewhat solemn, there is a hint of playfulness in her eyes. Camille Corot's "Portrait of a Child" is a beautiful and touching work that captures the innocence of childhood.